Construction of a quadruple gazebo, six- and octagonal 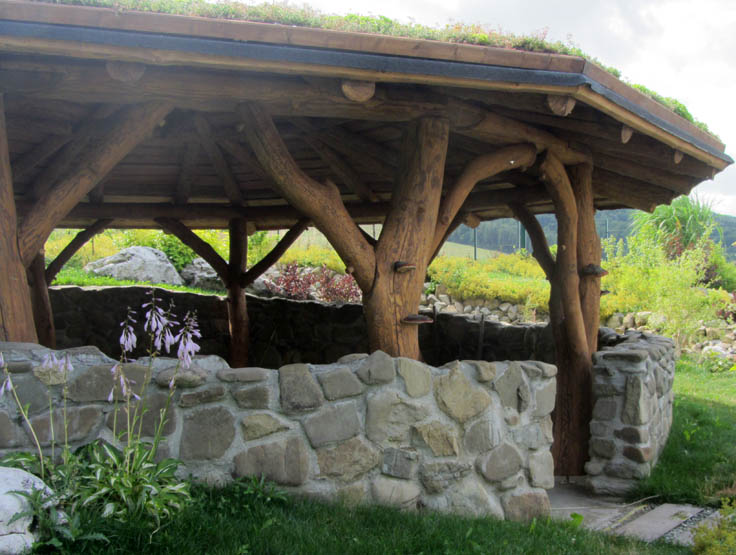 Construction of a quadruple gazebo, six- and octagonal

The most frequently built garden gazebos are those erected on a square plan. They are also the simplest objects of this type, because they are based on four load-bearing poles and a simple platform. The whole is crowned with a single-, two- or hipped.

The most important element in the construction of gazebos is the execution of point foundations, with the number depending on the number of vertical bearing columns fixed to them.

Various types of roof structures are used in buildings of small garden architecture. They are generally steep roofs. The exception to this rule are some shed designs with desktop shelters, flat roof. However, this type of solution is not recommended due to the possibility of damage to the structure as a result of e.g.. load with a layer of residual snow. In this case, it is important to regularly remove snow from the roof.

The most popular type of a steep roof- gable- built of two sloping slopes, it is also not recommended as the finial of gazebos, because it does not generally fit in small buildings, causing disturbances in the proportions of the building, which gives the impression of unevenly distributed weight- the upper part visually overloads the light one, the lower part of the structure.

The optimal solution for roofing gazebos are multi-pitched roofs, combined with several, crossing slopes. These are four-, six- and octagonal, whose slopes are cut at the top or create a spectacular cone.

Construction of a recreational building, both on a square plan, and the hexagon, or even an octagon requires action based on a proven design. If we decide to undertake the construction ourselves, we must first carefully consider all stages of the construction and obtain the necessary assembly elements and the necessary tools.. However, the most important thing is that all the components of the space- bower, judgment, fence- they harmonized perfectly with each other, therefore the whole thing should be kept in one style. We can also commission a private company to make a gazebo, however, then the investment costs will be much higher.